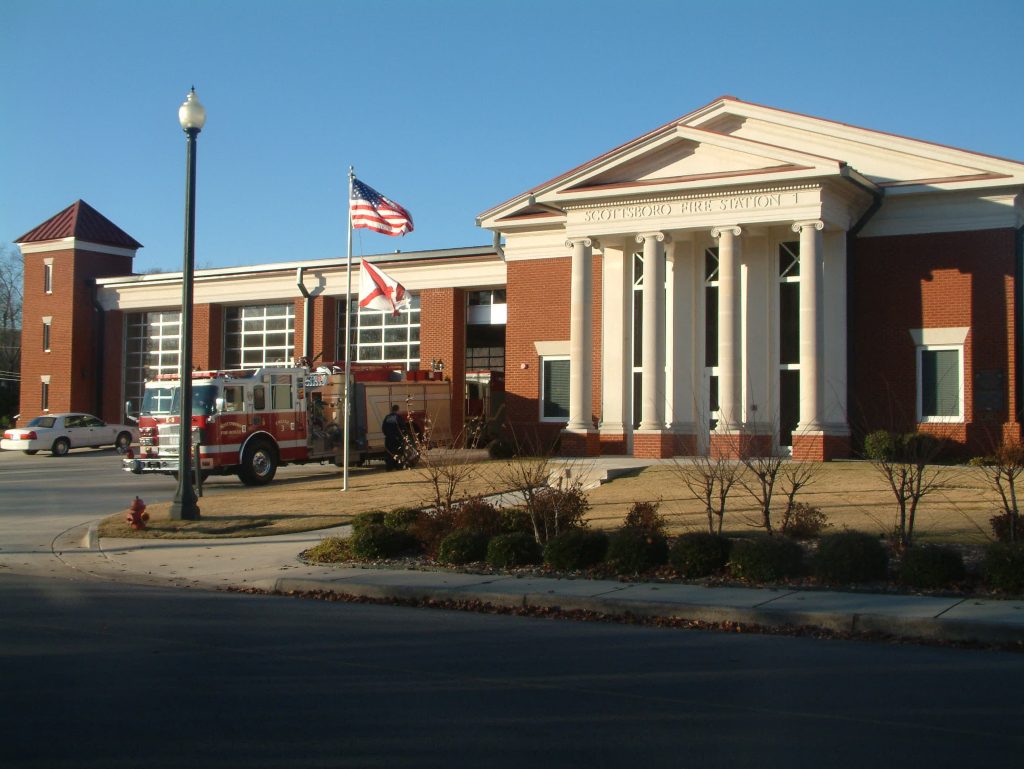 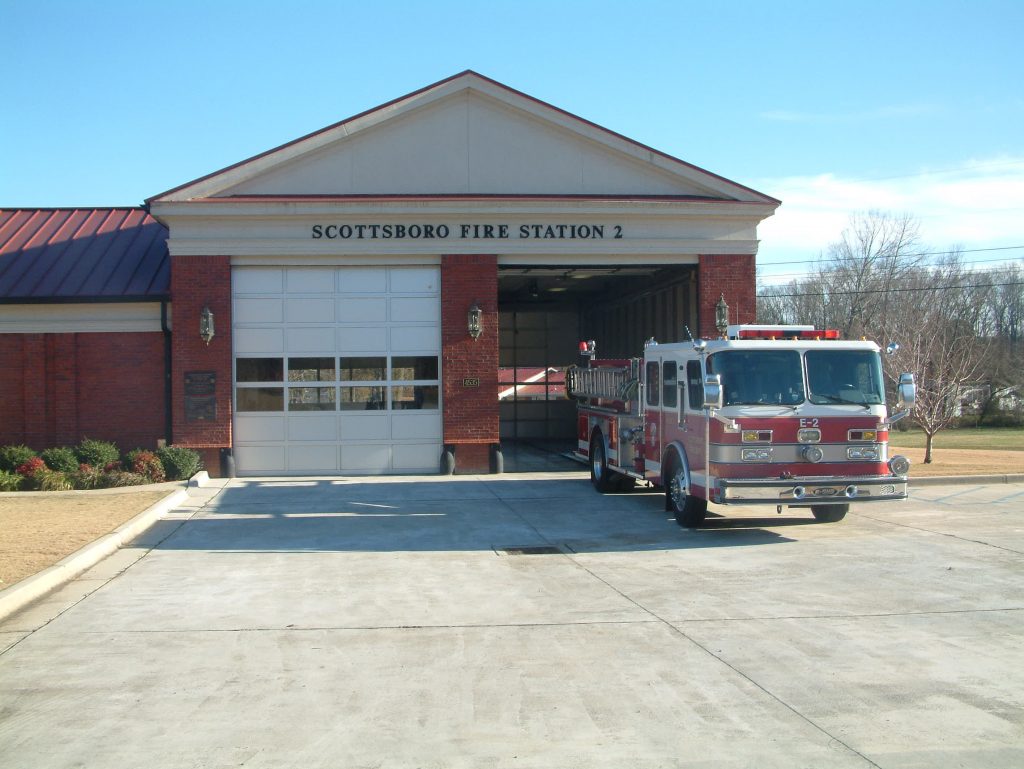 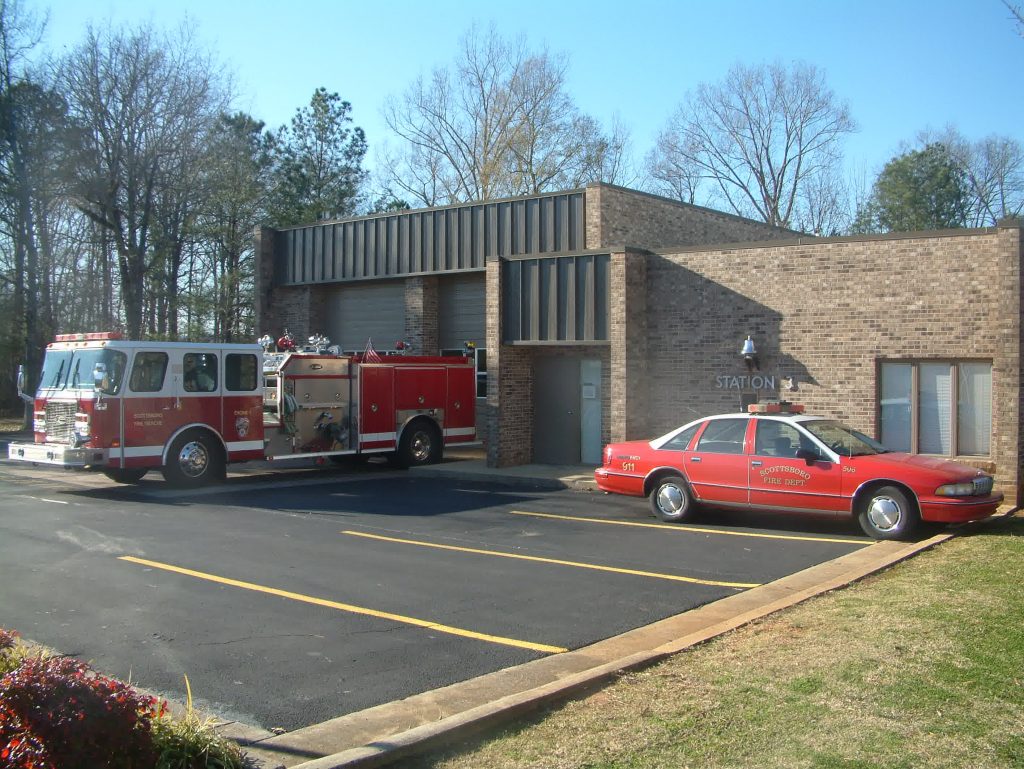 We provide fire protection and first response EMS for approximately 58 square miles inside the city limits of Scottsboro, as outlined in black on the photo. Additionally, Scottsboro Fire has a fire jurisdiction that extends well beyond the city limits to unincorporated areas surrounding Scottsboro.

Three firehouses are strategically located to provide the city with a timely response in case of an emergency. Firehouse #1 is first response to the area in blue, Firehouse #2 is first response to the area in red, and Firehouse #3 is first called to the area in yellow. Each location houses a fire pumper capable of at least 1250 gallons per minute of water, vehicle extrication equipment (Jaws-of-Life) and EMS equipment. Additionally, Firehouse #1 houses a 100-foot platform ladder truck with 1500 gallon per minute pump, a service truck equipped with specialized rescue equipment and additional firefighting equipment, a brush truck, and a reserve fire pumper. 24 hours a day, eleven firefighters are assigned to each shift, including a Battalion Chief. The Battalion Chief typically responds to high priority emergency calls in a command vehicle and is responsible for the daily activities of the shift and incident management during emergency scenes. Through mutual aid agreements, the Scottsboro Fire Department is proud to be able to assist, and call for assistance from the neighboring volunteer departments and the County EMA. When an emergency situation maximizes a department’s resources, mutual aid agreements allow other departments to assist in equipment and manpower. We also maintain automatic aid agreements with departments for certain areas of our response jurisdiction. To the extreme east, we partner with Limrock/Aspel Volunteer Fire Department, to the north we partner with Hollywood VFD and to the south on top of Gunter’s Mountain we partner with Swearengin VFD. These automatic aid agreements allow for a faster response to the extreme portions of our coverage area. 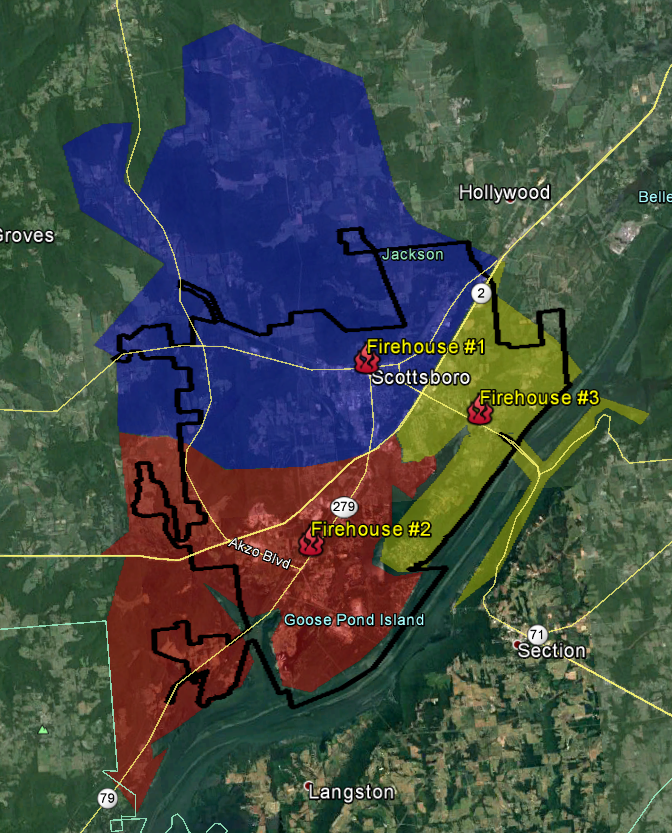 The Scottsboro Fire Department is committed to professional, quality public service by preserving the lives, property, and environment of the community through education, prevention, and protection; honoring the traditions of the fire service and training for the continually advancing dynamics of emergency services.

We make all Fire Reports open to the public with sincere appreciation to you and your families for continued support.

The Scottsboro Fire Department was first organized as a Volunteer department in 1937. Prior to then, the city owned a fire truck but had no organized structure to assist its citizens. The first fire station was located on the square, on the east corner of Broad and Peachtree Street, a location it shared with the original public library.

The town square was the center of the city and most of the volunteer firefighters worked within a few blocks of the station. When alarms would come in, a firefighter would sound an alarm that could be heard across the square. He would then drive the fire truck around the square, stopping to pick up the other firefighters as they would leave their shops to serve their neighbors.

On Friday afternoon, September 1, 1967, the Department lost Chief Bishop and Captain Floyd “Shank” Dawson to a Line-of-Duty accident while responding to assist Hollywood with a fire. Approximately 75 feet outside of the city limits on Old Highway 72, their fire department pickup collided with a vehicle in the area of the current Carol’s Chicken Basket. Captain Dawson was pronounced dead at Jackson County Hospital.  Chief Bishop died en route to a Birmingham hospital and was pronounced dead in Guntersville at Marshall County Hospital.

Porter Dawson was appointed to fire chief following the death of Chief Bishop. Chief Dawson served until his retirement in 1978, managing considerable growth in the department and the city as the department grew to 20 full-time firefighters and added Fire Station 2 on South Broad Street.

Lonnie Webb was named chief in 1978, a position he held for 22 years. Chief Webb retired in 2000 with over 35 years of service to the Scottsboro Fire Department. During his tenure, Chief Webb served as President of the Alabama Association of Fire Chiefs and oversaw the addition of Fire Station 3 on the east side of town.

Melton Potter was named acting chief in 2000, and appointed fire chief in 2001, serving until 2008 when he was elected Mayor of Scottsboro. Chief Potter acquired multiple FIRE Act grants for the department and expanded the level of EMS services provided to the citizens.

In 2008, Chris White was named fire chief and would serve until 2014. Chief White was instrumental in the acquisition of a FIRE Act grant in 2010, along with improving the apparatus fleet. Chief White retired from the department in 2014 and continues to be involved in the fire service through the Alabama Fire College.

Get the latest City of Scottsboro news, articles, and resources, sent straight to your inbox whenever we update them.

City of Scottsboro © 2021. All Rights Reserved